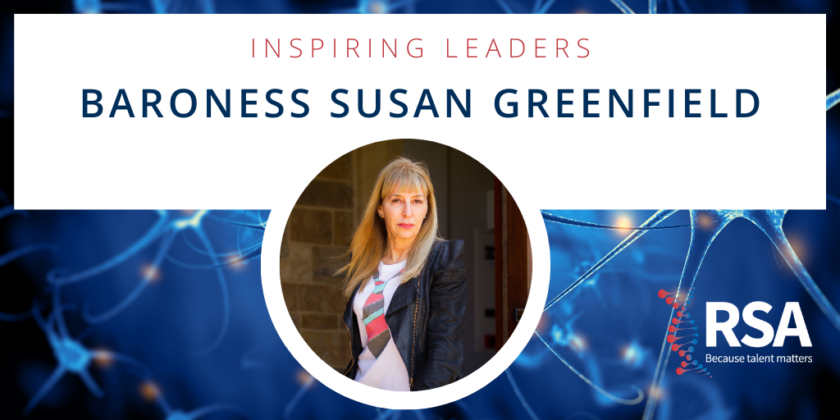 As a continuation of our Inspiring Leaders Series we were lucky enough to interview the amazing Baroness Susan Greenfield who is CEO and Founder of Neuro-Bio Limited. In this blog she shares her views on the essence of good leadership, influences in her life that helped to prepare her for leadership roles and advice for aspiring female leaders. Enjoy the read!

What makes leaders become leaders? Are these innate skills or are they learned?

The essence of good leadership is to convey an exciting vision and have the ability to inspire others to be a part of it. Throughout history people have been able to lead others by communicating their goals in the simplest and most powerful ways. U.S. civil rights leader Martin Luther King was able to achieve so much for disadvantaged minorities in the 1960s under his banner of “I have a dream” and President Kennedy gave a nation hope with his 1962 speech about putting a man on the moon. Even President Trump and Boris Johnson have succeeded by getting people to follow them with their own populist thinking. In all cases, whether it be for a good or bad outcome, the key is to make people feel good about themselves, to enjoy the experience of joining in with your vision.

History also shows how things can go badly wrong when people without leadership skills aspire to become leaders. Two recent high-profile examples were Gordon Brown and Theresa May. Both had sufficient management skills to become Chancellor and Home Secretary, very capable ones in the case of Gordon Brown when he was Chancellor during the financial crisis in 2008, and Theresa May by holding office for six years: but when it came to leading as Prime Minister, neither was able to inspire others with any particular vision and ultimately both failed once they reached the top.

Business leaders need these skills too, and as in politics, an inspiring vision needs a target. Unlike politics, in life sciences it’s never controversial, it’s the disease which is the focus and in the case of the work that we do at Neuro-Bio, it’s Alzheimer’s disease.

Visionary thinking is, of course, not enough in itself. Once you can inspire people, it’s essential to sustain their belief, trust and support. It’s vital to try and see things from the others’ perspective. I make sure that I take the time to talk to the people in my team and to understand their priorities and agenda. It won’t work if you shut yourself away in an office or even try and communicate from behind a desk, this behaviour just creates more barriers, metaphorical as well as physical. Ultimately, to be a good leader, it’s important to be confident in yourself. Confidence allows you to build relationships easily, as you don’t feel the need to put hierarchical structures into place and you can relate more easily to your team.

Much of this is learnable – that people like to be treated as individuals, that making eye contact and using the right voice tone is important and that being open and straightforward with people builds support. Some find that this comes naturally, it’s second nature, whereas for others it needs work.

Can you tell us about events or influences in your education or early career that helped to prepare you for leadership roles?

Well, I was an outsider from an early stage, half Jewish and growing up in a secular household, with a compromise of both a cross and a Star of David around my neck. My family was a modest working class one but with a large and richer extended family, and a great respect for education. I was lucky to gain a place at an independent, selective school which was intellectually demanding and helped me to fulfil my potential. I stood out for different reasons there as most of the girls came from wealthy backgrounds and lived in houses that were very different to ours. But it taught me money wasn’t the most important thing in life. At home, I was encouraged to believe that anything was possible, I learnt to be confident and to take responsibility. My parents praised me when praise was due and yet always remained grounded and never let me ‘show-off’.

Mentors have played transforming roles in my life. At school, I had a wonderful teacher in the Miss Jean Brodie mould – Veronica Lemon – and it was largely through her that I learnt the value and rewards of application and hard work. At Oxford, where I was accepted to read Philosophy, my tutor, Jane Mellanby, recognised, when I graduated, my potential as a scientist despite me not having studied science at school. Her capacity to see my potential resulted in me undertaking a doctorate in Pharmacology and this was the bridge to life science and the rest of my career. Professor John Stein, a friend for many years since he supervised me as a post-doc at Oxford, has continued to be a mentor to me and is the first person I turn to at significant moments in my professional life.

What are the most important leadership skills that you’ve learned and would want to pass on to aspiring leaders?

You have to understand the kind of things that worry people and help them to overcome them so they can perform better in their roles. That doesn’t mean that you should be friends; be friendly and helpful so that you can guide them but don’t try to be their friend as this can confuse the relationship. If you say something, make sure you mean it, behave in a consistent and fair way, keep your team informed about what you’re doing, make commitments and stick to them. It’s about the mutual respect that I mentioned earlier, treat people as you expect them to treat you.

What advice would you give to aspiring female leaders?

Women tend to rule by consensus but it’s important that as a female leader you suppress that tendency. The decisions are yours to make, you’re not equally responsible with others, you are accountable and your reputation is on the line. Lead by consultation but not by consensus.

Finally, remember to have a sense of humour, be able to laugh with others and not to take yourself too seriously. It’s only business.

Follow our LinkedIn Page to keep up to date with the full Inspiring Leaders Series.